Not only does ALIM include digitized editions of previously edited texts, but it also promotes and funds new digital-born editions and first transcriptions of unpublished texts, as well as of works considered particularly relevant to the study of Italian medieval Latin culture. 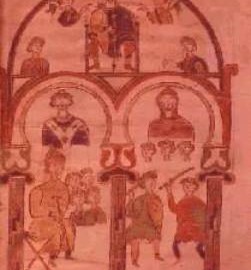 Not only does ALIM include digitized editions of previously edited texts, but it also promotes and funds new digital-born editions and first transcriptions of unpublished texts, as well as of works considered particularly relevant to the study of Italian medieval Latin culture.

In the field of epistolography, ALIM co-financed the edition of the letters of Pier della Vigna (edited by A. Boccia, E. D’Angelo, T. De Angelis, F. Delle Donne, R. Gamberini, a team of scholars coordinated by Edoardo D’Angelo), as well as Maestro Guido’s texts (edited by E. Bartoli). The first transcription of the so far unpublished epistles of Bonfiglio of Arezzo, 13th century (by G.C. Alessio) will also be uploaded in the near future.

A set of newly edited hagiographies is represented by the corpus edited by D’Angelo; the texts focus on the territory of the current diocese of Terni and his saints in medieval times. These works are published in a series specially created by CISAM, entitled Studies on the Diocese of Terni-Narni-Amelia. The four volumes, containing a history of the various territories of the dioceses in the Middle Ages, offer a critical edition of all the hagiographic sources relating to them. ALIM hosts the full Latin text or a rich anthology of the texts cited above, recently published with ecdotic apparatuses and commentaries.

Other significant works, still unpublished and therefore very difficult to access, are available to the readers through the ALIM site: see, for example, the first transcription of Bandini’s Liber Inferni (a part of the huge Fons memorabilium universi) edited by M. Gambineri under the direction of F. Stella.

Next entries into ALIM: the first transcription of the Letters of Bonfiglio of Arezzo, the integral version of Rationes dictandi by Master Bernard (at present only the first half of the text, taken from the edition by Rockinger is available on ALIM), the Lombardischer traktat (a compendium of texts by Adalberto Samaritan and Hugh of Bologna) and, finally, the Summula of Guido Faba (a short version of his Summa).

The texts are encoded in such a way as to reproduce the source-edition, to facilitate use and quotations. The bibliographic datasheet of each text usually gives short notes about any peculiarities to be found in the source-edition.

The strong interest by members of the ALIM Scientific Committee to the philological problems and the potentiality of scholarly editing in the digital age is expressed also by providing some pilot digital editions, very careful about encoding procedures and sometimes innovative for the solutions adopted by the editors: on the Alim site a link to the new editions of two witnesses of the Lombard first law collection, namely the Edictum Rothari (643), will be soon made available. More specifically, the project (co-financed by Alim) aims to provide the image-based diplomatic-interpretative edition of two major witnesses of the Edict (Vercelli, Biblioteca Capitolare Eusebiana, ms 188, and Ivrea, Biblioteca Capitolare, ms XXXIV.5). The browsing software for visualizing the manuscripts and their texts was developed at the University of Pisa and is called EVT (Edition Visualization Technology). EVT was firstly used for displaying the Digital Vercelli Book (<http://vbd.humnet.unipi.it/?page_id=384/>), and was chosen here since it is one of the simplest, as well as more efficient tools available to create a digital edition starting from documents marked according to the TEI XML standard.

In the next months on the ALIM site Orso Beneventano’s De nomine will be also available: the edition, promoted and cofinanced by ALIM, presents a grammatical Latin treatise dates back to the 9th century whose complete version was never published hitherto. As for the encoding method, this digital critical edition can be considered a pioneering one: the text, preserved in only one manuscript (Casanatense 1086), is encoded on different textual levels (namely: graphematic, alphabetic, and linguistic levels).