The collection of medical texts produced in Italy and available in the Archive pivots around Salerno, renowned place for medical studies in the Middle Ages, thanks to early contacts with Arabic circles. Medieval medicine is based on anatomy and the treatment with herbs; diagnoses almost always rely on uroscopy, a practice that characterizes western medicine. 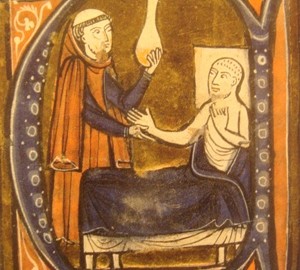 The collection of medical texts produced in Italy and available in the Archive pivots around Salerno, renowned place for medical studies in the Middle Ages, thanks to early contacts with Arabic circles.

Some texts of this section belong to the Schola Salernitana: some works by Matthew de Archiepiscopus, usually identified with John Platearius the Elder, who lived between the end of the 11th century and the middle of the 12th; the work by Cofone, a coeval of the previous author, as well as the anonymous De secretis mulierum, traditionally attributed to Albertus Magnus (but recent criticism has questioned this attribution).

Slightly later and probably not related to the Schola Salernitata – albeit coming from the same Neapolitan environment – is Peter of Eboli, author of the successful De Balneis Puteolanis, a poem that celebrates the therapeutic thermal waters of Pozzuoli. The landscape of the charming Flegrea area, as well as the therapeutic properties of the sulphurous waters, which in some medieval texts (Otia imperialia, Chronica di Partenope) are traced back to the magic of Virgil, are widely attested in literature and in the folk tradition. Thanks to the mixture of medical and scientific information and popular traditions, De Balneis enjoyed a large fortune, as testified by the many codices in which this text is transmitted, and by the numerous vernacular translations.

Another place of crucial importance for medical knowledge was Arezzo, especially after the official establishment of the Studium (ca. 1215). In ALIM one can find the work of Guido Aretinus (end 12th-begining 13th century), possibly a logicae professionis minister with some medical expertise. He respectfully departed from the Salerno masters because he possessed more advanced sources, i.e. Arabic sources, such as Avicenna’s Canon medicinae, widespread in the West thanks to the translations of the Toledo school since the middle of the twelfth century.

With the exception of De secretis, which seems to meet different needs than those of applied medicine (together with physiological information on reproduction it contains general reflections on life and the universe, not free from a certain misogynism which betrays a monastic use), others texts are reservoirs of medical technical terms, and provide clear evidence of diagnosis and treatment of many diseases: both the Schola Salernitana and  Guido d’Arezzo follow the most advanced guidelines of medicine of those times,  which treats diseases on the basis of disharmonies, as shown by the well-known Theory of Humors.

Medieval medicine is based on anatomy and the treatment with herbs; diagnoses almost always rely on uroscopy, a practice that characterizes western medicine to such an extent that William of Rubruk reported in his Itinerarium his astonishment, for the Chinese, though skilled in the art of medicine, did not make use of urine inspection.