The collection dedicated to historiographical texts aims to highlight, through some paradigmatic works, different ways of reporting history in the Middle Ages. 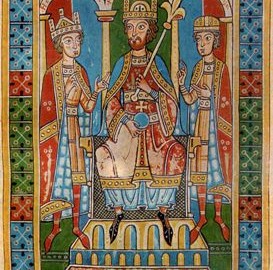 The collection dedicated to historiographical texts aims to highlight, through some paradigmatic works,  different ways of reporting history in the Middle Ages. The history section of the database is perhaps the most nourished, with texts ranging from the 8th to the 15th century, and from many Italian areas.

The collection offers town records (annales and chronacae) concerning, among others, Milan, Genoa, Verona, Ferrara, Arezzo or more southern places, where the relevant centers are represented by the abbeys (Chronicon Vulturnense, Annales Cavenses). The section devoted to the Norman Kingdom is particularly rich, indeed it includes Romualdo Guarda, the Rerum Sicularum Libri of Saba Malaspina, and Ugo Falcando’s text.

A text of difficult genre attribution is the Chronicle of Salimbene de Adam, a historical book filled with anecdotes and autobiographical intrusions, an extraordinary source also for the author’s attitude towards the characters and the events which he describes.

In addition to the texts belonging to the historical genre, also those related to adjacent fields can be found here – e.g. documentary sources, legal texts, letter models, all containing news and historical details. This collection is especially suitable for establishing thematic paths, thanks to the versatility of ALIM as a research tool. You can use the archive to gain a multifaceted vision of an event or a historical character, as well as to compare the various sources concerning the Italian territory.

For example: On the figure of Frederick Barbarossa, you can look at the Gesta Frederici – an imperial-biased chronicle of Frederick campaigns composed by Godfrey of Viterbo –, the texts of Ottone and Acerbo Morena, some passages of Chronica Universale by Sicardo Cremonese or of Romualdo Salernitano’s  Chronicon, the Chronica by Salimbene de Adam, the Carmen de gestis Frederici I in Lombardia – a verse history of the imperial campaigns –, some annalististic sources like Marangone’s Annales Pisani or the Annales Ceccanenses – though the latter are richer in materials on the papacy.

In addition to the aforementioned typically historiographical works you can find the document n. 386, edited by Pasqui, which records an imperial privilege for a well-known monastery of Arezzo and the letter written to the emperor by four masters of the Bolognese Studium, with the request to grant permission for the students of the rebellious cities (Cremona, Milan, Brescia) not to be expelled from Bologna (Magistrorum epistola ad imperatorem pro suo negotio).